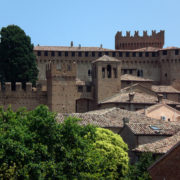 Arcevia is surrounded by splendid fifteenth-century style centers, which have preserved their typological peculiarities until today. A real backward path can be made over time starting from Acervia, the ancient Rocca Contrada in the province of Ancona, and continuing into the territory up to the fortress of Nidastore, on the border with the area of Pesaro. Starting from Acervia, the Castle of Avacelli is the second stage of the journey. Rocca Contrada founded it on a hill on the border with the territory of Serra S. Quirico. The visit continues at the Castle of Castiglioni, which stands on the edge with the area of Serra de’Conti. The Castle was probably founded after the abandonment of the castle of Fossaceca which was nearby. It is worth visiting the Castle of Piticchio, one of the most evocative and best preserved in the territory of Arcevia, which stands on a hill about seven kilometers from Arcevia. In the Castle of Montale, on the other hand, it is still possible to admire the watchtower of the ancient fortification reused and re-proposed as the bell tower of the church of S. Silvestro, rebuilt after 1830. A visit to the Castle of Loretello, which rises on a hill 300 meters high about 15 km from Arcevia; among the remaining castles of the territory is the oldest one. We have news of the Castle of Loretello starting from 1072, built together with the church of S. Andrea by the monks of Fonte Avellana; it became the possession of Rocca Contrada in the second half of the 200s. A short distance from Loretello is the small Castle of S. Pietro, almost unchanged in its fifteenth-century urban plan, which however preserves few traces of the original wall structures. The Castle of Palazzo is instead one of the most characteristics of the whole territory: it is an urban structure with powerful stone and terracotta walls and a beautiful fifteenth-century entrance door. The Castle is on the slopes of Monte Caudino. Finally, the one geographically to the west is the Castle of Caudino, near which there was the famous battle between the Guelfe and Ghibelline forces for the possession of the territory. 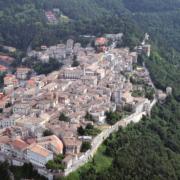 Arcevia’s tour can begin from the mighty city walls (XIII-XVI century), which can be reached in several places, with some circular towers, two polygonal towers, and four of the five original doors. Near Porta del Sasso there is the church of St. Francesco di Paola (1728-’30), the baroque masterpiece of the local architect Arcangelo Vici; you can reach the most important street of Corso Mazzini, called the ‘500’ main street, where you can see the most important buildings of the city.

At the beginning, moving from east to west, the Duchess Palace (first half of the 17th century) is on the right, so called because this was the summer residence of Livia della Rovere; faces the apse and the side of the most important religious monument of the city: the Collegiate of San Medardo.

From the church, you reach right onto Ramazzani until you reach Fiorenzuola’s alley; From here you go down to Via Angelo Rocca, where there is the church of St. Maria del Soccorso, built in the XVI century by the Augustinian Fathers, where various works of high artistic value are preserved. Returning back to Corso Mazzini, and continuing towards the central square, you will see on the left the wonderful facade of Palazzo Anselmi (XV-XIX century) and immediately after the Complex of St. Francesco, attested by the end of the thirteenth century, when the Franciscans decided to build their convent within the historic center.

Continuing, you reach Piazza Garibaldi, the heart of the historic center, where you can see the town hall, one of the oldest in the region (attested by 1259); continuing on the right, here is Palazzo Mannelli then Pianetti, a splendid late Renaissance building, one of the most beautiful in the province. A few meters further, on the other side of the road, stands the Palazzo dei Priori (XIV century), with a revolted room of that time which is annexed to the Misa Municipal Theater (XVII century, restored between 1840 and 1845). Finally, on the same side of the course, there are the church of S. Agata and the church of St. John the Baptist.